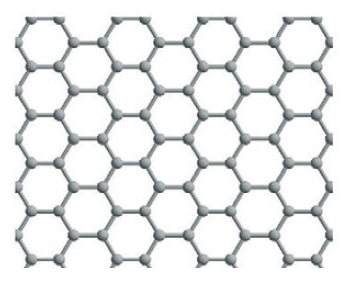 Graphite it is an allotropic form of carbon with characteristic hexagonal form of crystals the consequence of which is one of the highest strengths known in nature and unique physical properties. Graphite materials applied in industry never have fully shaped structure being rather a transient form between amorphous carbon and graph­ite crystal. Their properties, and therefore quality, are precisely correlated with the degree of graphitization, inter­nal structure and impurities content which does not exceed 10ppm in the best graphites.

Graphite – a commonly known sub­stance, for instance as pencil inserts, has gained considerable significance in technique. It has multiple forms and in­dustry applications of key importance for machine construction very often. For these purposes we can classify three the most known graphite types.

Natural graphite which is a result of metamorphism of rocks reach in organic compounds like hard carbon, however, this process runs in consid­erably longer geologic time. Graphite deposits occur in large dispersion, both in amorphous form (black graph­ite) and in crystal form as flake graph­ite (silver), having characteristic scaly structure.

Acheson graphite manufactured in industrial process as various types of products shaped from materials of high carbon content like petroleum coke and anthracite. Raw material is ground, and then shaped and sintered into required shapes which after im­pregnation are graphitized in high temperatures, over 2500°C.

Expanded graphite – soft and flexible material made by exfoliation of graphite crystals intercalated by sulphur or fluorine atoms. Pressing of expanded mass gives materials in the form of profiles, yarn or foil which in­herit high resistance of graphite and at the same time flexibility and elas­ticity similar to elastomers and fibre based materials.

Graphite combines both ceramic materials features and some prop­erties of metals, having lubrication properties and extraordinary wear resistance and resistance to external environment influences.
High thermal conductivity of graphite is on the average level of most metals. It exceeds conductivity of ferrous metals and steel but it is no match for copper and aluminium. Good conductivity of graphite has an influence on its high thermal resist­ance and protects against damage or overheat in dynamic applications as sealing, bearing, sliding elements.

Low reactivity and resistance to most chemical agents. Graphite is chemically stable in normal condi­tions and resistant to most acids and alkalies except strongly oxidizing ones as aqua regia (nitrohydrochloric acid) and liquid oxygen. However, at the temperatures of over 450°C graphite can react with oxygen or water steam from environment and can also dis­solve in some liquid metals and cre­ate carbides. Graphite doesn’t melt at high temperatures like most solid bodies but it undergoes sublimation. In reduction atmosphere it can work successfully at the temperature up to 2500°C.

In the case of graphite, combination of good thermal conductivity with mechanical strength places it at the very high level among the best fire-re­sistant materials. Additionally, its low thermal expansion coefficient in com­parison with other high temperature materials causes that it is exceptional­ly resistant to thermal shocks.
Mechanical strength at high tem­peratures. Opposite to the other high temperature structural materials, the mechanical strength of graphite is rising together with temperature rise and it doubles its value at the temper­ature of 2400°C. This peculiar feature causes that graphite is often z better structural material in high temper­ature conditions than alloys on the basis of infusible metals. Furthermore, graphite has relatively low density at the level of 1.6 to 1.9 g/cm3 and be­cause of this its relative strength and effectiveness in constructions might be even higher.

Electrical conductivity. Graphite’s ability to conduct electrical power causes that it is the only high temper­ature conductor which is in general use, besides tungsten, molybdenum and vanadium group elements. This feature in connection with high wear resistance causes wide application of graphite in electrical engineering, met­allurgy and machinery industry. What is important, graphite’s conductivity rises together with temperature rise at the temperature range from 400 to 600°C which is its peculiar and key feature for its application as electrodes in ultra high power arc furnaces. The graphite resistivity can be also controlled in the production process by the use of mod­ified batch materials or by saturating finished products with metals.

Self-lubrication and high wear resistance. Because of the scaly struc­ture of graphite crystals and easiness of planes breaking off and sliding, graphite covers surfaces of machine working elements with thin graphene film. This causes the effect of laminar lubrication in all conditions even after other types of lubricants go dry, also at high temperatures. Graphite keeps it scaly structure even in case of consid­erable apparent wear and the biggest fragmentation.

Amorphous graphite is the most common and cost efficient form of natural graphite. Unfortunately it is strongly contaminated and its struc­ture is a transient form between amorphous carbon and graphite. The flake graphite hasn’t these defects. It is a form of natural graphite with high­ly ordered crystalline structure. It has characteristic metallic gloss and it is often called silver graphite or crystal graphite. The nature of spatial struc­ture of flake graphite results in ease of breaking bonds between adjacent planes and creating a scaly structure. The consequence of this structure is high anisotropy of graphite physical properties. Hardness, strength and conductivity in a direction parallel to the axis of crystallite exceed several times the value in a direction perpen­dicular to that axis.

The basis of natural graphite classi­fication is its carbon content and gran­ulation. Most types exist in a form of powders but the flake graphite is also available in the form of liquid disper­sion, pastes and ready to use greases. Among the most important applica­tion areas of graphite there are:

The moulded graphite is a synthetic carbon material which has crypto-crys­talline structure. It is manufactured in the process of burning and graphitizing of materials on the basis of carbon pre­cursors. Typical semi-finished products made of moulded graphite are the ele­ments in the shape of plates, bars, roll­ers and big blocks weighing up to a few hundred kilograms. The semi-finished graphite products may be classified in three basic categories. These are: 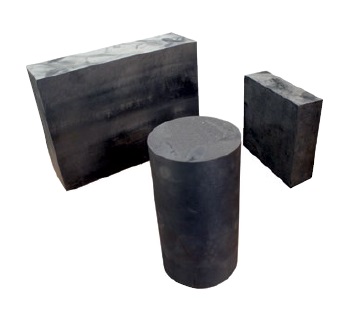 Growing expectations in relation to properties of structural materials of machines and devices stimulate con­tinuous growth of demand for high quality products from carbon and graphite. These materials meet high strength criteria and moreover they are neutral for health and environment which makes them to be a modern and easy to use material. Above half of production of pressed graphite is used in the form of electrodes in arc furnac­es (EAF) to produce melted metals. Graphite consumption is also quickly growing in many other industry sec­tors. This regards both traditional and the latest applications. These are:

A choice of proper graphite kind for specified application is connected with specialist knowledge as regards its parameters and internal structure. It happens very often that graphite suitability, except physical parameters, depends on factors connected with specificity of production process, kind of precursor and impregnates used.

The manufacturing technology of this material was worked out relatively recently. It consists in fragmentation of graphite crystals into single graphene layers and blending it in homogeneous structure, most often in the form of foil. In the production process the precise milling lines are used which guarantee the dimensions and density stability in the whole mass what in consequence has decisive influence on the quality of various types of final products.

The products made of flexible graphite, as plates, seals and stuff­ing-box packings are intended for technical seals of the highest param­eters, working mainly in power engi­neering and industry systems under a pressure up to 1000 bar. The flexible graphite is also used for manufactur­ing other seals, such as sealing tapes, spiral and multi-edge seals, packing rings of GDR type for industry fittings, flat seals in flange connections, var­ious kinds of formed seals as well as seals for automotive industry.

Temperature resistance of pure graphite foil is above 2000°C which is the reason why this material is used also for high temperature elements in industrial furnaces, electrical contacts and heating electrodes in vacuum furnaces as a flexible and at the same conductive refractory material. Pro­duction volume of materials made of flexible graphite is continuously grow­ing and now it exceeds 200 thousand tonnes per year. This constitutes about 10% of total graphite products consumption in industry..